There have been some very exciting changes since version 0.2, both to the code quality/infrastructure and to the game elements.

Here is a rundown of the most noteworthy changes.

To improve on stability, code quality, power, and efficiency, the entire server-side code was re-written early on in development.

What used to be a clumsy, multi-threaded, pure Python sockets driven application is now a full-fledged Twisted protocol factory.

The new server has some cool benefits:

Our old database tables were completely decoupled from our models and the gap was bridged shoddily with some hand-written SQL queries which were prone to SQL injection, inefficient, difficult to maintain, and, frankly, just terrible all-round.

Django is originally a web framework for Python, but what we’re interested in is its extremely powerful object relational mapping (ORM) framework. Benefits:

When the game is updated, e.g. a new skill is introduced or an entity model needs a new attribute, Django (mostly) automatically propagates these changes to the database using its powerful migrations system.

Although it was a huge slog, the switch to using both Django and Twisted was a wise move early in development, otherwise it would have been much more difficult. These two powerful frameworks will aid in much easier development for future released.

The map system was rewritten so that the following can occur:

What we came up with is the following:

These files, respectively, represent terrain for the ground level, roof level, and things between which are collidable.

These files must be formatted according to the Moonlapse map file specification.

Yeah, it’s a long story. Basically something that looks like this:

In this made up context, what this means is

How do I make one of these files?

You can draw a bitmap file and use the maps/bmp2ml.py script to spit out a properly formatted file. The script defines a colour palette for you, so your bitmaps need to have those exact colours loaded.

In the future, we will likely add a proper map editor GUI with the names of the terrain materials but please bear with the project in its early stages.

Here are some example bitmaps and what they look like as compressed data.

And here is how it looks in-game 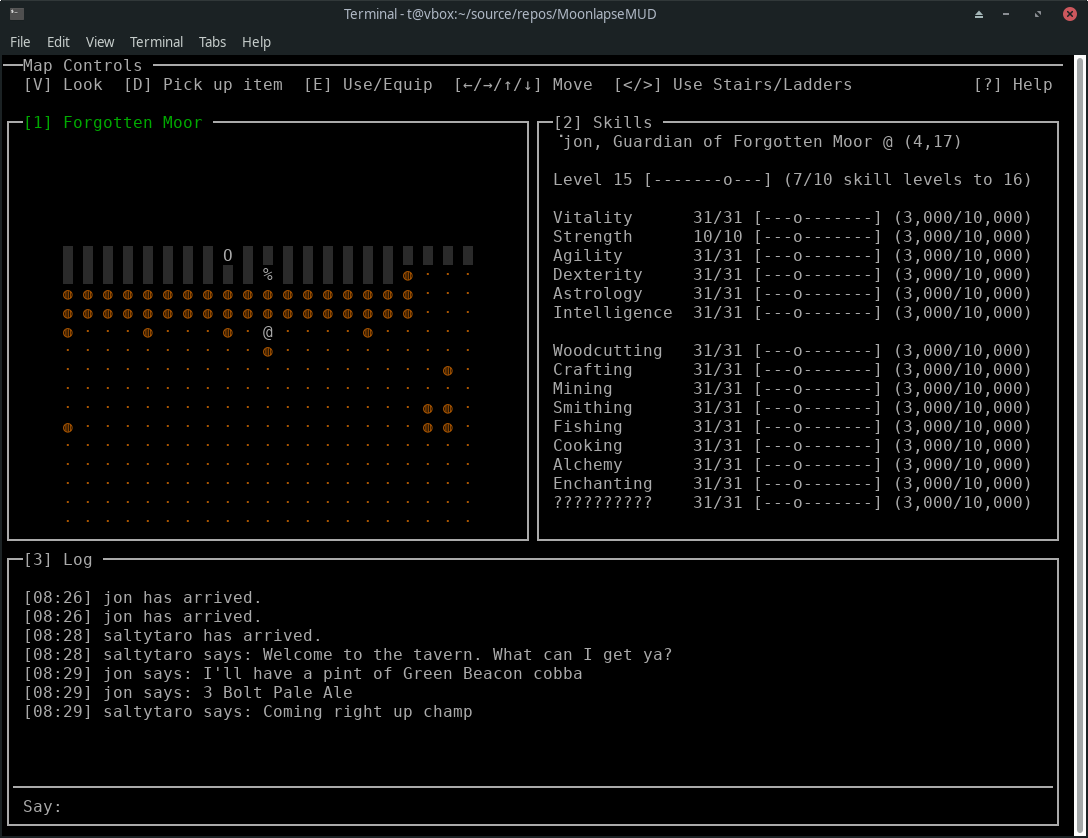 It is now possible to teleport to any location in the game with portals! This includes across different rooms.

Conceptually, a portal is just an entity which has a position in the world, as well as another “linked” position. When a player moves into the portal, instead of occupying the same space as that portal, they immediately assume the portal’s linked position.

Aaaaand that’s it! Thanks for reading, we are really excited about releasing version 0.3 of MoonlapseMUD!